Images from the 2003 Facets release of The Decalogue. 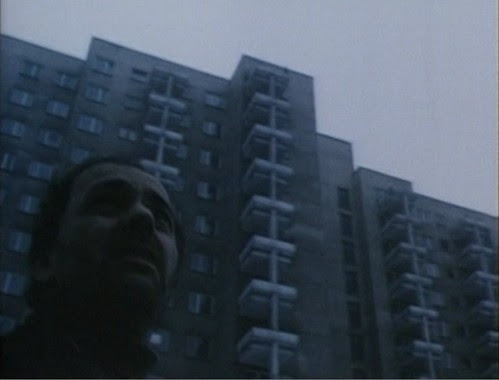 Think back to when you were at school and you solved a math problem or learned a new concept. Something where the pieces just “clicked,” and you got it. Everything seemed clear, fresh, and new, perhaps because we felt we understood the world and had a better grasp on it. A math equation seems so reassuring and straightforward. It tells us This equals That. It’s precise and definitive, giving us a simple solution to a problem.

Yet our command of math problems can make us confident and proud, to where this hubris can create absolute faith in a system. Our faith gives us a sense of superiority, as if we understand the world better than the non-believers. It feels good to have an answer and not just for math problems, but for life itself. It’s as if we’ve discovered the secret key to the eternal question: What does life mean?

In Decalogue I, Pavel is happy when he solves the math problem. He’s glad he has the answer and also that the problem came from his father, who he sees as a kind of god. The answer he finds is a number, which has a satisfying finality to it. That is the answer. Period. While numbers have closure, they can also be disappointing once we realize how limited they are. What does it matter if Pavel figures out when Ms. Piggy catches Kermit when he’s presented with something inexplicable like a dog’s death? For once, his father fails to provide a satisfying answer.

We all go through that phase when we think our parents have the answer to everything. The world seems safe and understandable, like a cocoon protecting us from reality. So when Pavel’s dad tells him that death is when the heart stops pumping blood, we stop moving, and we cease to exist, that cocoon is shattered. His answer has the finality of a number. Yet Pavel is not satisfied, because his aunt believes with the same conviction that there is an afterlife. The question is not: Who’s right? But rather: How can two people have opposing beliefs, yet absolute faith in them?

The father trusts his system of logic. Like the chess player using a system for the games she plays, he uses his computer to lock doors, turn the faucet on, and predict the weather. It’s a system he has absolute faith in, but one that isn’t perfect. His pride on it costs him his son. Yet how is his faith any different from a religious one?

The father trusts his numbers just as the aunt trusts in God. Ask any religious person: “How do you know God exists?” and the answer will probably be: “Because I have faith.” But what if they’re wrong? How can Christians, Muslims, Jews, Atheists, Buddhists, Hindus and every other belief all have the conviction that they are right? We can’t answer that with a satisfying conclusion, just as Krzysztof can’t give a satisfying answer about death, which leaves us in an existential quandary. Perhaps the problem lies in the question itself. Maybe everyone’s right. Maybe we should simply tolerate and respect a person’s beliefs. To each his own, you know what I mean?

But what if beliefs manifest themselves in the way we live? Which of course they do. Should I respect an occult society that sacrifices children on blood altars and dances with rattlesnakes just because it’s their faith? Or a more relevant question: How do you respect a Catholic’s belief against abortion if you are Pro-Choice? If you bend over for their beliefs, you are renouncing your own. We cooperate as best we can, but we’ll never agree on everything. So what should we do? Proclaim faith in God? Then which god? Islamic, Jewish, or Christian? If Christian, then should we believe in Catholicism, Mormonism, Evangelicalism, or any other denomination? See what I’m doing? I’m looking for a definitive answer, which I’m not sure is possible.

I must confess I’m stuck at the moment, trying to finish this up. I feel the need to conclude, but how? Maybe ruminate on a shot in Decalogue I? How about when we see the father enter the church frustrated and knock over the altar. Candle wax spills on a portrait of Mary, and she appears to cry. Is this an act of God? A sign? Or perhaps it’s coincidence? Or the eyeball-rolling (but nevertheless true) explanation: The filmmaker’s intention. I don’t think “fate” and “coincidence” are mutually exclusive. For me, they are two names for the same phenomenon. But I don’t think the name we give is as important as the phenomenon itself. We notice these things, and isn’t that the important part? They give us a measure of stability and meaning in a world of chaos. That we notice them at all blows my mind more than trying to figure out what caused them. 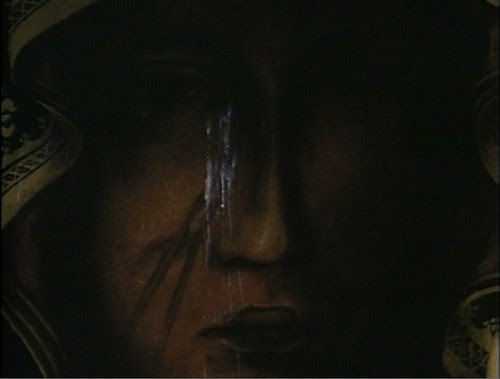 I guess in the end, we’re left with questions. What we have in us is the desire for answers, which raises more questions like: Why are we so keen on looking for solutions? Maybe it should be enough to simply accept this part of us and use our faiths as something to hold onto, like something that anchors our sanity and gives us hope.