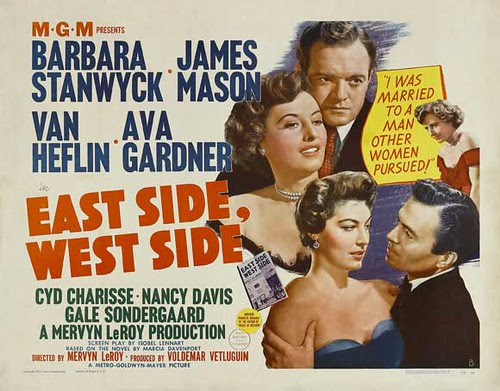 It seems a bit much posting on another Stanwyck movie again, but this one is really worth a look. First of all, it's got some amazing performances. I've only seen James Mason in Lolita and North by Northwest and Van Heflin in The Prowler and Act of Violence, but I'm boldly putting them up there among my favorite actors—especially after seeing East Side, West Side.
James Mason oozes that oily persona that's as charming as it is repulsive, in part because the script wisely runs counter to his somewhat off-putting style. He's almost too suave, which makes him seem rather cold and distant, yet his memory for his wife's quirks and their times together softens and humanizes him. Mason's performance, along with the writing vivify his character in a way that makes him seem too good and, at the same time, too flawed. He can't stay away from Isabelle, but he's too honest to hide it for long.
There's a brutal honesty to this picture that extend beyond Mason's defeated frankness. Ava Gardner, by her own admission is admittedly low—even pointedly telling Mason she's always been that way. Even Van Heflin doesn't dance around the issue. The whole movie is surprisingly straight-shooting. This isn't to say the writing simplifies the human experience by removing subtlety or depth, because it does quite the opposite. Heflin's plainspoken, worldly admission to Stanwyck shows remarkable maturity that sidesteps the typical wide-eyed adoration that plagues lesser movies. By contrast, Gardner's honesty is played as a calculated move. With Mason, she's like a cat playing with her prey; she speaks to see what effect it has, deliberately throwing wrenches into the machine.
The movie feels unusually fresh, even by today's standards. The ending is disillusioned and unfulfilling, instead adopting the middle-ground of two extremes. I hesitate to call it noir, but it certainly flirts with it. The straight honesty of this picture seems fitting of director Mervyn Leroy (Three on a Match, I Am a Fugitive From a Chain Gang, and Gold Diggers of 1933), but I'd be shortchanging the writers if I ignored them. At any rate, it's a movie well worth the time.
Posted by hal0000 at 9:21 PM No comments: